A new noise metric for aviation 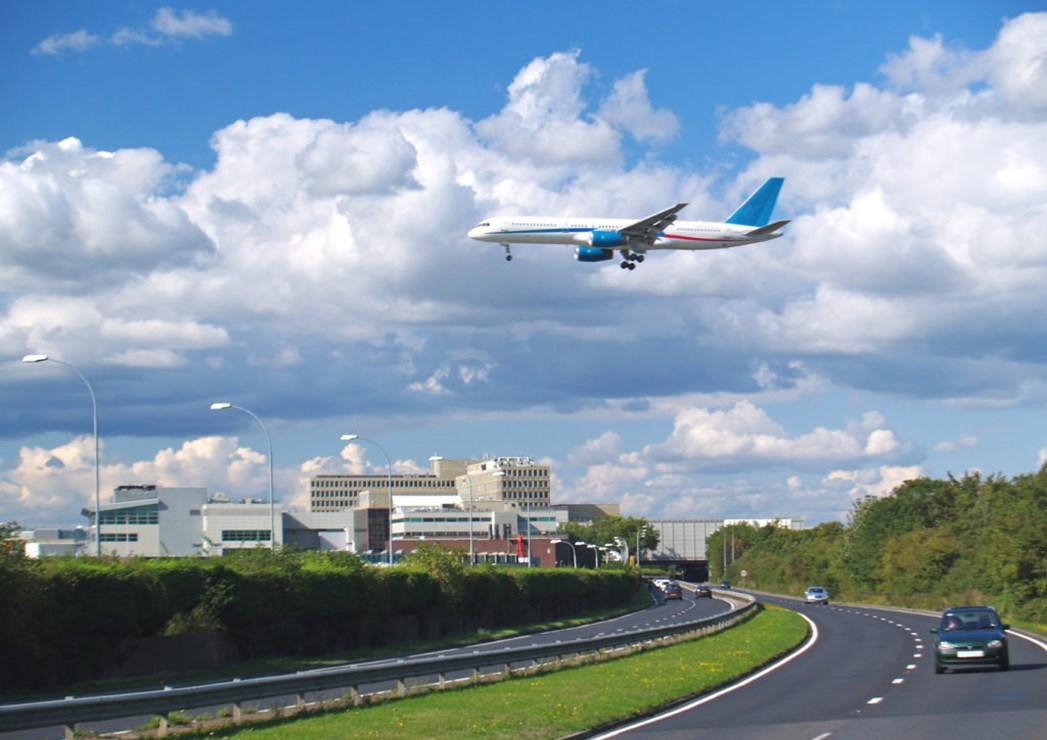 As the demand for air traffic rebounds and airspace becomes saturated once again, we need to balance the environmental impacts of aviation with the many benefits that air travel brings. So the development of a new noise metric designed to further incentivise quieter arrivals should be music to the ears of many. This is the story of the development of the new Low Noise Arrivals Metric, and our part in it.

How quieter arrivals are accomplished today.

Before we jump in feet first, it’s important to understand the basics about noise abatement procedures. These are low noise operations that minimise the impact of aviation noise on communities living below arrival and departure flight paths. The responsibility for following these procedures falls to pilots, air traffic controllers, and airport operators, who are accountable for the way an aircraft is flown and for monitoring and reporting adherence to the procedures. At many airports compliance rates are publicly reported and airlines are held accountable if their performance isn’t up to scratch, thus incentivising good behaviours.

As early as 1978, studies have identified best practice measures to reduce arrival noise including the likes of Continuous Descent Operations (CDO), which are designed to keep aircraft higher for longer during their approach. CDO enables continuous descent to the runway in a low drag configuration with low power and low thrust, avoiding the need for extended periods of level flight. As such, aircraft are kept higher at most stages of the descent compared to a conventional step-down approach, reducing noise, fuel burn and emissions.

The Arrivals Code of Practice (published by Sustainable Aviation, an industry body) measures an arrival as a CDO if it contains, below an altitude of 6,000ft: no level flight, or one/multiple phase(s) of level flight not longer than 2.5 nautical miles (NM).

The angle of descent affects noise on the ground, and today the optimum CDO profile is defined in the Code of Practice as having a 3 degree descent angle. If an aircraft flies an extended level segment on descent (ie longer than 2.5NM) it is categorised as a non-CDO flight, requiring additional engine power to maintain level flight at a constant speed and thus creating more noise.

CDO is the primary method of reducing noise experienced on the ground beneath arriving aircraft, and today, compliance rates are very high. This means that there is no longer an incentive to further reduce noise from arriving aircraft, leading to a review of the current CDO definition.

The team behind the new metric.

Discussions began back in 2017, when Gatwick Airport’s Noise Management Board (NMB) challenged the sensitivity of the existing CDO metric. This led to preliminary research by the Civil Aviation Authority’s Environmental Research Consultancy Department (CAA ERCD), and a 2018 study sponsored by Future Airspace Strategy (FAS) and overseen by Sustainable Aviation. NATS tested the criteria using historic radar data and my team here at Egis have provided project management support since study launch, and later used innovative tools based on Python and PowerBi to validate the new metric.

The (occasional) problem with today’s CDO.

Whilst broadly effective, CAA ERCD’s research identified that there are occasions when CDO does not distinguish the quietest flights. A CDO angle of descent can vary, and in some instances arrivals can be categorised as CDO compliant but may not necessarily be low noise. For example, aircraft with a shallow angle of descent would have a larger noise impact on the ground compared to the target CDO (with a 3 degree descent angle). 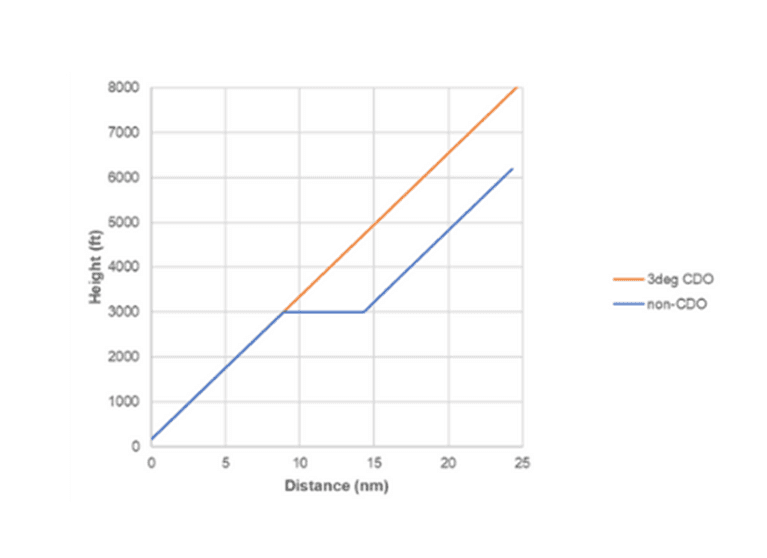 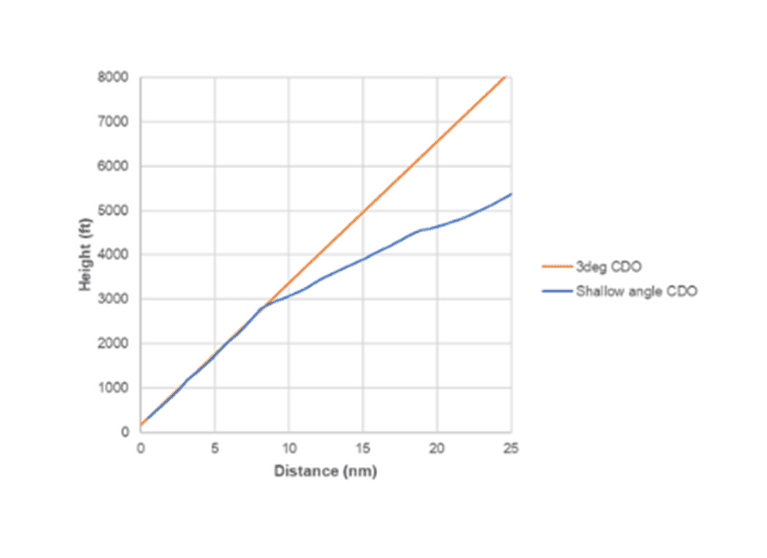 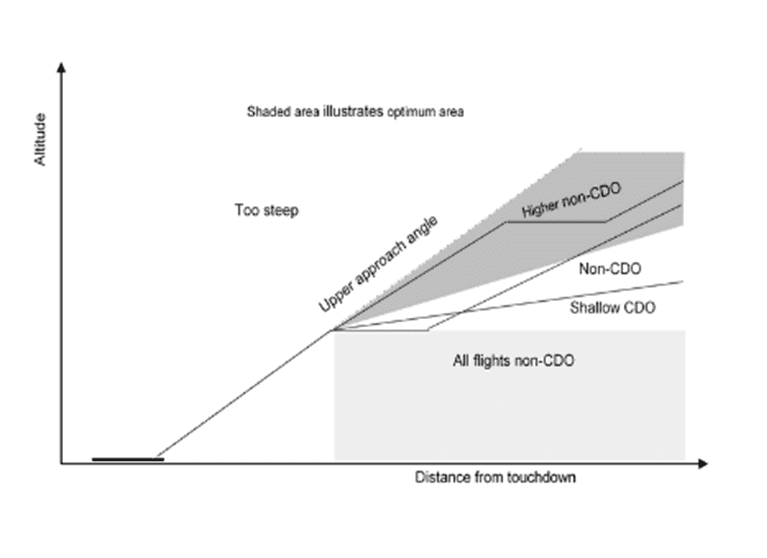 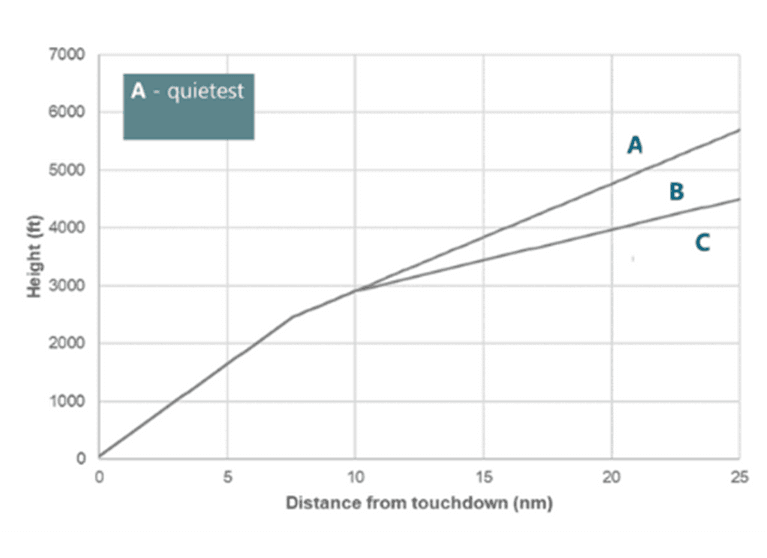 The environmental theme is picked up again in my colleague's blog on the implications for aviation of COP26.

What is the Low Noise Arrivals Metric?

We have established that a new metric is needed, but how does it complement the current CDO metric? A number of objectives for the new metric were set out following CAA ERCD’s initial analysis:

To better rate low noise arrival performance, two height boundary conditions were developed, creating three low noise categories. These three categories are defined as Cat A, Cat B, and Cat C, where Cat A is the quietest and Cat C the loudest. The new metric incentivises steeper initial/intermediate descent angles encouraging higher descent profiles, but not to the extent that would necessitate any changes in speed control or aircraft configuration. Once the metric was developed, my team led the validation work to assess the profile criteria and noise performance in a range of real-world conditions and with a wide range of aircraft types. We confirmed that indeed profiles falling into Cat A are generally the quietest, whilst those that fall into Cat C are the loudest.

In terms of measuring compliance against the metric, only CDO aircraft will be assigned a low noise arrival category. The lowest category entered on descent will define the low noise rating for each flight, therefore by means of an example, if an aircraft descends in Cat A for most of its approach but dips into Cat B momentarily, this aircraft will be assigned low noise arrival Cat B. It’s important to note that a tolerance has been applied to the criteria to address uncertainties.

During CAA ERCD’s initial research, it was identified that as well as permitting shallow angle approaches, the current CDO definition is not necessarily suitable for some modern aircraft types that require periods of shallow descent or level flight during the initial approach (at higher altitude) in order to reduce their speed. The current definition permits phases of level flight not longer than 2.5 NM – newer aircraft types may require phases of level flight longer than 2.5NM to help reduce their speed in the quietest manner. The idea moving forward, is that airports will monitor the metric and assess the proportion of flights classified as CDO and non-CDO within the three low noise arrival categories. Based on this information, and as phase two of this study, CAA ERCD will determine whether the current CDO criteria should be revised and incorporated into the proposed Low Noise Arrivals Metric definition, or whether it will remain separate. The new metric will incentivise aircraft to descend at higher altitude whilst meeting the current CDO criteria, and discourage level segments closer to the ground, thus reducing the arrivals noise. In the long-term, airports will be encouraged to monitor and report compliance against the new metric as they do today with existing noise abatement procedures.

The study with our project partners is complete, and the CAA CAP report was published on 13 January 2022. The CAP document contains details of the work undertaken as part of this study, along with a technical description of the Low Noise Arrivals Metric itself. In parallel, Sustainable Aviation has established a technical sub-group, whose focus is to define the necessary next steps for the deployment of the metric ready for operational use. It is intended that the outcome of this study will inform the design of new Performance Based Navigation (PBN) arrival procedures to minimise noise impacts in the future.

Before long, this new metric will be adopted as a key indicator of aircraft noise performance and will play its part in further incentivising quieter arrivals to improve the lives of those impacted by aviation noise.

Small! airports have an important role to play in regional connectivity. Could they also be green pioneers for UK aviation?