All insights •Drone integration: SWIMming in the same direction? 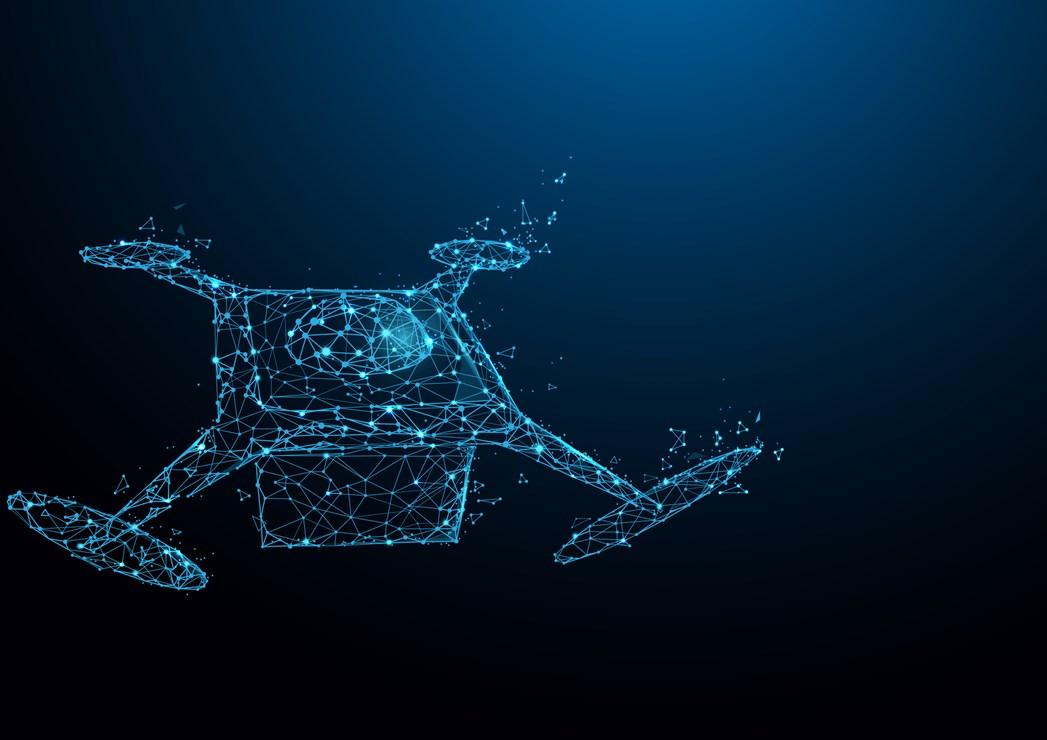 The drone industry has made much progress in the last two years; something I experienced for myself when researching the regulatory situation on drone communication standards. Over the 11-month duration of the study, the “current situation” changed no less than five times! It’s not surprising that the industry has been likened to the ‘wild west’ by some[1] and that regulatory and standardisation bodies have struggled to keep up. Given the pace of change and the rivers to cross, are we any further on now than we were in 2019 – particularly when it comes to communications and interoperability?

CNS - does one size fit all?

Tracking small drones is a challenge because they are too small to be detected by contemporary primary radars. If cooperative surveillance is to be used it must be optimised in terms of (emitter) weight and price, otherwise the specific use cases for smaller drones, like urban air delivery, are just not feasible. What’s more, the Communications Navigation and Surveillance (CNS) technology will need to be built to an interoperable standard across different geographies and airspace users, giving rise to further challenges. Drones are expected to share the airspace with manned traffic or to operate in neighbouring airspaces like Very Low Level airspace, close enough to need to cooperate with manned aviation, and air navigation service providers.

The holy grail of the drone industry is operations beyond visual line of sight (BVLOS). When the drone is not constrained by the pilot’s (or observer’s) position it can do so much more! Of course, without the pilot’s direct view the drone operator is even more reliant on information provided by sensors and CNS systems, which are proven and vital components in aviation safety.

CNS in a drone context is completely intertwined with and underpinned by the communication system. Navigation is primarily derived from messages sent from satellites and surveillance is achieved cooperatively by position reports (messages again). These (position reports) are especially important as the whole concept of “see-and-avoid” turns into “detect-and-avoid” when drones are operating BVLOS.

So, given that drones will ideally be sharing the airspace with manned traffic, and not segregated, what tools can safely integrate the two? In shared airspace, all stakeholders (users and service providers) must communicate. On the one hand, there is a need to integrate new users (drones), but on the other, the system is reaching capacity and we need to find alternative solutions. The problem is that the aviation spectrum, which hosts VHF communication, has already reached capacity. It hosts all legacy navigation infrastructure like VORs, NDBs or DMEs, including legacy ADS-B ES 1090 frequencies. To gain more capacity in congested European airspaces, Eurocontrol has tightened the channel spacing from the standard 25 kHz to 8.33 kHz[2], but the spectrum is a finite resource.

There are various technical challenges to delivering the needed performance in terms of capacity, latency, bandwidth, coverage, cost or weight. Currently, no single technology can clearly meet all the challenges we are facing today. Therefore, technology agnostic and performance-based communications standards need to be agreed, and technologies proven, to allow the roll-out of BVLOS.

Shaping standards on command and control

The Control and Non-Payload Communications (CNPC) link is a vital technology element to drone integration that carries significant safety implications. It can support surveillance (drone’s position reported through the CNPC link) and may underpin Detect and Avoid (DAA) functions (assuming 5G is designed in the same way as for automotive technology).

When I conducted research on CNCP link standardisation back in 2019, the results were disappointing in that no standards had been established at that point.

Since then, the RTCA in the US has developed a standard for CNPC link LOS operations[3] (medium and large drones) in the urban environment. The standard however applies only to air-to-ground links (LOS) links. In remote areas where ground stations are unavailable the CNPC link has to be satellite-based. There are multiple choices of satellite orbits (eg low or geosynchronous) having implications on latency, handover or link budget. A satellite-based BLOS standard is still under development. 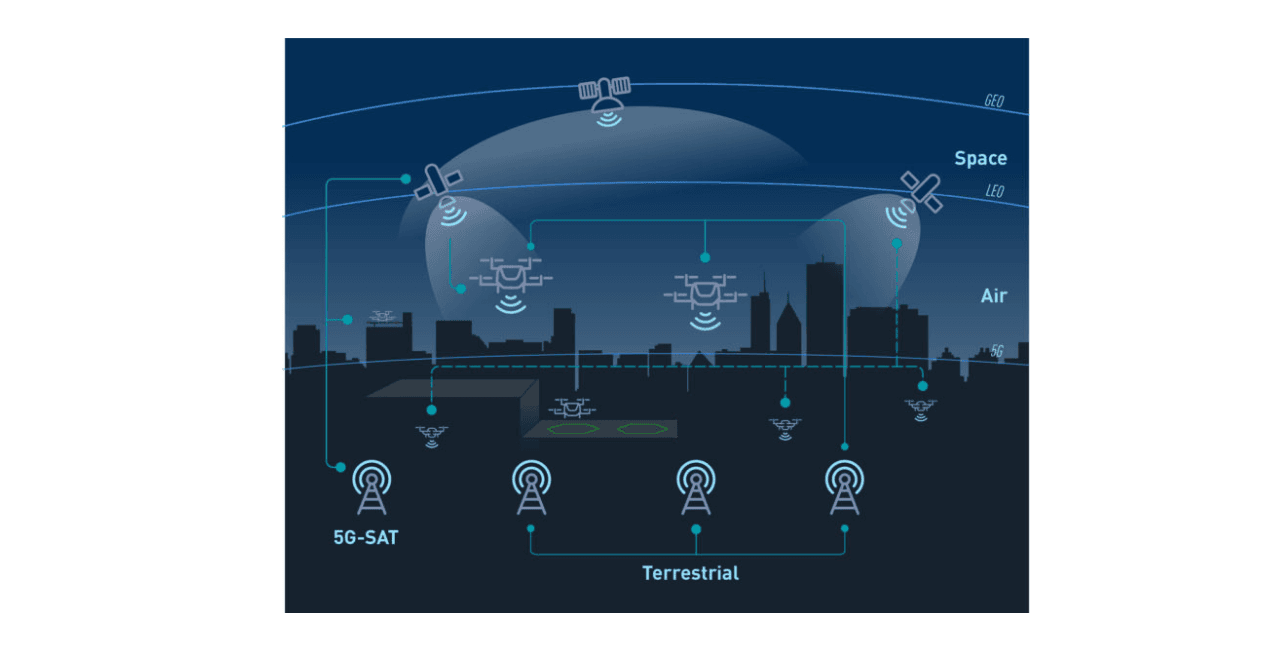 For smaller drones, mobile (LTE) and wireless (Wi-Fi) networks will be used initially, but these are far from optimal solutions given the infrastructure is targeted at ground users, and the regulations are designed for that. For example, approvals to use a mobile network for drone operations are granted on a case-by-case basis.

Likewise, further research and trials are ongoing as a part of U-Space/UTM initiatives. For more details on possible options for CNPC see the following paper from the 2019 IEEE Aerospace Conference: UAV Command and Control, Navigation and Surveillance: A Review of Potential 5G and Satellite Systems[4].

European standardisation initiatives are being led by Eurocae which has established a SG-21 / RPAS C2 Datalink, as part of the WG-105, with activities in terrestrial and C-Band Satellite link. Currently the SG-21 appears to be inactive.

SWIMming in the same direction

The information exchange aspects of the CNPC link are being addressed by SWIM (System Wide Information Management), an ICAO initiative that is also part of U-Space (which became an EU regulation in April 2020[5]). SWIM mostly investigates options for information exchange in strategic (pre-flight) and tactical (during flight) phases to provide situational awareness. In ICAO literature, SWIM addresses ground-ground exchanges between stakeholders, while air-ground communication is based on a datalink service. SWIM is the glue that binds all stakeholders to guarantee high levels of service in terms of security, reliability and cybersecurity. There are many stakeholders and communication flows to consider, as depicted in the flight information management system (FIMS) design and architecture of SESAR’s Gulf Of Finland (GOF) project demonstration, which enabled data exchange between two air navigation service providers (in Finland and Estonia), several U-space service providers, eight drone operators and two manned aircraft operators. 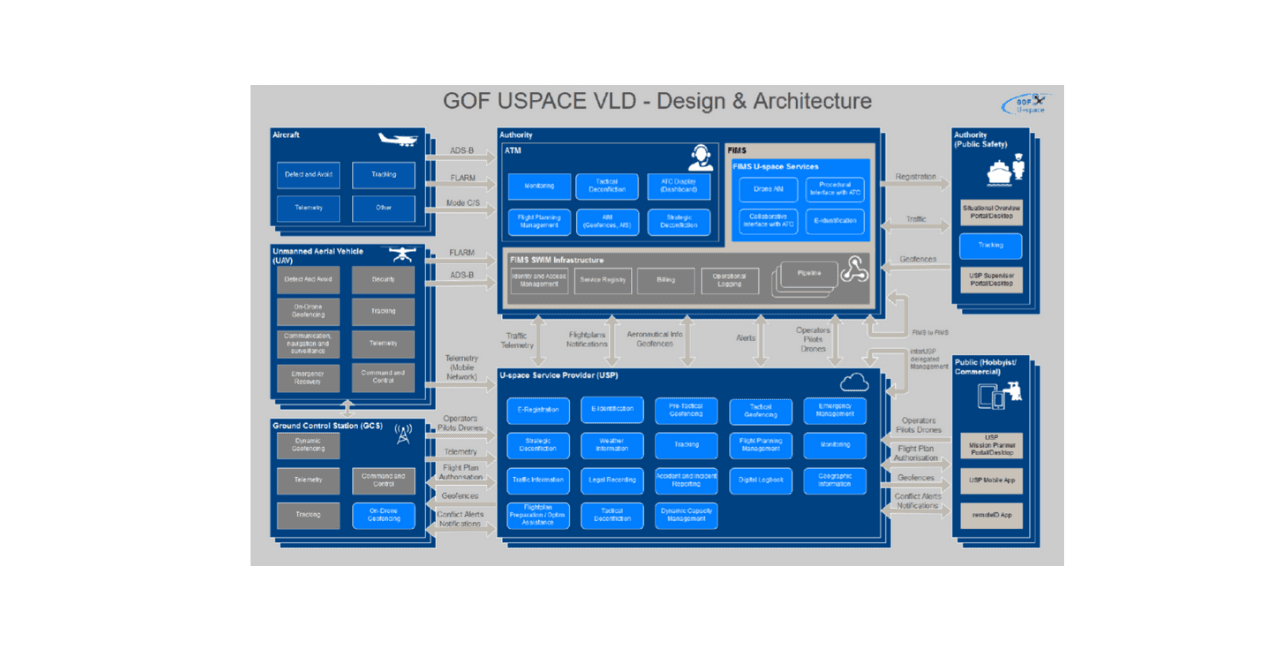 GOF showed that service providers and operators were able to connect to the open platform to access FIMS and ATM data, but identified that more work was needed on tracking solutions and addressing poor mobile network coverage. The project demonstrated the need for all airspace users to access one source of reliable airspace and aeronautical information – and common standards for communication between systems.

Since the 2019 Drone Study, colleagues have begun work on the SESAR AURA project, aiming to define requirements for U-space-ATM information exchange protocols based on SWIM and a Concept of Operations in a fully collaborative environment – results are due end 2022. Also, this Spring, a broad cohort of colleagues from across the Egis business collaborated on a ground-breaking White Paper examining the infrastructure implications for urban air mobility in two different types of cities.

Key findings from our 2019 Drone Study were unclear responsibilities and missing standards. Manufacturers did not want to invest in technology that could end up uncertified, and regulators did not know what (technology) to regulate. We are in a very different situation today and numerous activities are happening on R&D and at the regulatory level. Although we are not there yet, today responsibilities are clearer, standards are emerging, and there is a clear direction of travel. We’re SWIMming fast, and in the same direction.

Integrating drones – a decade of progress