How can the efficiency of 2x25kV electric traction with a positive feeder be increased while keeping the same catenary arrangement and incurring no additional costs? This is the question this paper attempts to answer.With this in mind, we will first demonstrate that the choice of arrangement (1) of the catenary components and their polarities has a direct impact on the quality (3) of 2x25 kV traction with a positive feeder and identical equipment (2). Next, we will demonstrate that the gains in terms of power supply “quality” lie within a range between 5% and 15%. To operate railway lines efficiently, gains on this scale cannot today be ignored.

A catenary “arrangement” presents the various electrical conductors composing a catenary system in a spatially ordered manner. The relative physical positions of its various conductors are described in the form of a cross-section with respect to the track axis. For example, for a 2x25kV system with a positive feeder, it is necessary to position the different electrical conductors for each rail track: a carrying cable, a contact wire, a "negative" feeder, a "positive" feeder, an overhead protection conductor (OPC) and the rails. Some of these conductors, such as the rails, the carrying cable and the catenary contact wire, are already naturally in their physical positions. The other three, i.e. the two feeders and the OPC, can be positioned according to needs and requirements, but also taking electrical clearances into consideration. Once the position and electrical polarity of each conductor have been established, the assembly forms an “arrangement”.

To be able to compare arrangements, a common data set is also required. These various data items are those most commonly used in an electrification of this type (number, sections and nature of conductors).

The “quality” of the traction power supply in a 2x25kV system is characterised either by authorising a larger distance between injection points and substations, or by allowing the electric load (available power) of trains to be increased - or even a combination of both. By measuring traction power supply quality in this way, potential ways to improve the performance of the supply system can be determined.

Ever since 2x25 kV electrification first emerged, early examples being the Angers star-shaped system and then the new Paris-Lyon line, fitted in some sections with a positive feeder, catenary arrangements have always been defined in consideration of factors such as environmental issues or ease of assembly, but never with a view to improving the 2x25 kV traction power supply system itself.

By using various software applications (Excel and Simulink), one of which is an electrical equipment simulator, we can compare different "arrangements" and prove that choosing one type over another is not without consequences.

All the results presented for the simulations were obtained using the following process:

To be able to compare the electrical performance of different catenary arrangements, it is necessary to define an electrical value that represents the efficiency of the solutions being considered.

The electrical value adopted and generally used to determine the performance of an energy source is its short-circuit power, which in this case is characterised by the short-circuit current at each point of the area supplied by the 2x25 kV traction system with a positive feeder.
Therefore, for a given arrangement, the curve composed of short-circuit current values as a function of distance from the injection point represents electrical values that can be used to characterise performance in terms of power supply quality.

The simulations will be performed on the basis of a conventional double-track 2x25kV traction power supply configuration. This configuration is composed of the following elements:

The Matlab/Simulink diagram given below illustrates this configuration.

The simulations are performed on the basis of a 5/5 matrix as presented in section 1.5.

By short-circuiting the system in front of the substation and then after each AT section, we will obtain seven short-circuit current (Isc) values for each arrangement. These seven values will be presented in the form of a curve (an example of which is given in the figure below). The intermediate values between two points are meaningless; only the curve as a whole can be compared with another one associated with another arrangement.
The curves are noted Isc = f(d), i.e. short-circuit current as a function of distance to the supply point, which in the case studied in this paper can be up to 60 km (six AT sections measuring 10 km). 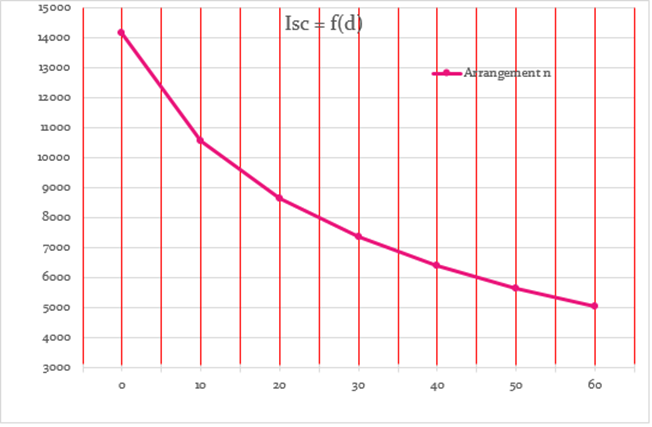 Curve given as an example, plotted on the basis of 7 evaluation points.

During the studies leading up to the patent filed by Egis, Egis’ Simalim software and the University of Birmingham’s simulation software also specified the short-circuit currents along the supply sector. The values and the shape of the curves obtained consolidate the results from the present simulations.

What is remarkable about this value associated with short-circuit currents is that it is related to the power supply distance, because it represents the source impedance throughout the supply sector. Therefore, for identical Isc values, the performance levels are identical in terms of voltage drops.

The starting point of the curve, in the top left-hand corner, is the maximum current of the substation transformer. The internal impedance of the source and the transformer limits this current to 14,000 A (as a reminder, this limiting value is given by the Technical Specification for Interoperability (STI)). Then, as the distance from the substation increases, the short-circuiting current decreases, since impedance increases depending on the length of catenary added and the impedances of the ATs.

To summarise, the higher this curve is situated on the graph, the greater the short-circuiting current values and the better the traction power supply quality.

When comparing the results from simulations of different arrangements, all the other elements are identical: section and material of the various conductors, electrical characteristics of the transformer and autotransformer source, etc. This comparison can hence be used to establish the difference in traction performance between arrangements by modifying the electromagnetic influences of the catenary conductors in this way.

Analysis of the various situations 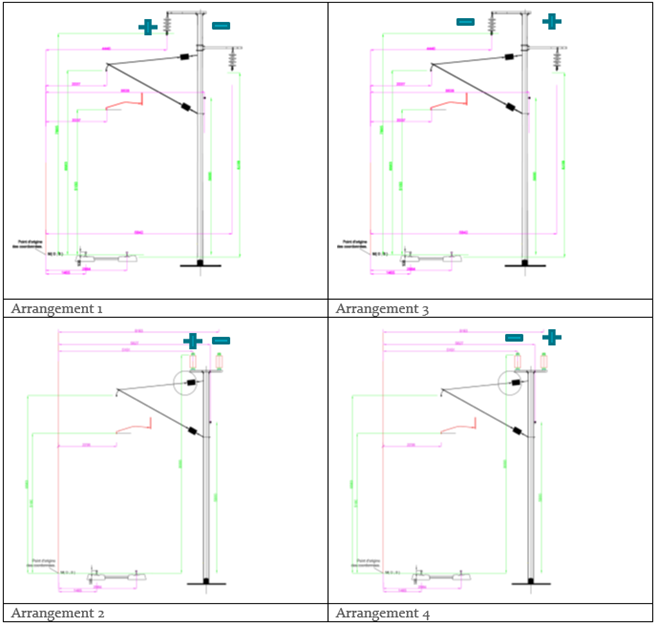 The comparison is made on the basis of:

Arrangements 3 & 4 are hence completely identical to arrangements 1 & 2 in physical terms; only the polarities of the conductors differ, and the negative feeder is hence as close as possible to the catenary.

Possibilities offered by the simulation systems

The impedance calculation process was discussed in section 1.5. The flexibility of these software applications (Excel and Matlab/Simulink) makes it possible to test all the arrangements defined in this paper, as well as all the other configurations (such as those using Scott transformers or autotransformers with different capacities, for example).

The result curves are as follows: 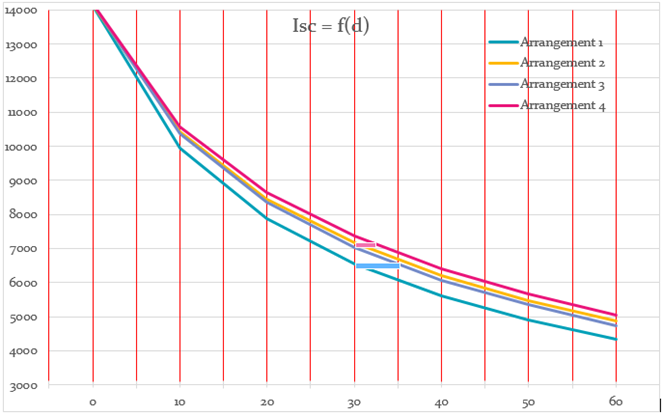 The result curves are similar, which was to be expected. Given the spread of these curves along the Y-axis, these arrangements can be ranked in order of increasing electrical efficiency. This order is 1,3,2 and 4.

This hence proves that the electrical efficiency of an arrangement is directly linked to its physical/geometrical composition and the position of the electrical polarities.

Arrangement 3 brings a significant improvement, of around 5 km at 30 km. This value is represented by the blue rectangle on the figure given above, since for an identical electrical performance the supply distance increases by 5 km.

Arrangement 4 brings a significant improvement, of around 2.5 km at 30 km. This value is represented by the pink rectangle on the figure given above.

It should be recalled that the reversal of arrangement polarities is the subject of a patent held by Egis, and this patent has proved its relevance once again. The expected gains are indeed achieved, and indeed depend on the arrangement chosen.

On this basis, but also based on the other simulations performed on other arrangements that are not presented in this paper, reversing the feeder polarities systematically leads to a gain; these are the consequences stated in the patent mentioned above.

This gain is significant if the initial arrangement is no. 1: it is around 5 km at 30km, which means it is possible either to supply the traction system for 5 km beyond the 30km mark with the same supply quality, or to upgrade the load in terms of traffic on the railway line.
Factoring electric traction efficiency in 2x25kV with a positive feeder into the choice of catenary arrangement can achieve a substantial gain, of around 15% (5/30). This gain takes the form of either a longer supply distance at a constant load or an increased load at a constant distance, which is far from negligible.

Reversing the polarity of the feeders on a catenary while keeping the identical arrangement, and thus departing from the usual practice (i.e. with the polarity as close as possible to the catenary) may improve the short-circuit current and, hence, the available electrical power. From an operational point of view, this offers potential to improve speed or increase the traffic capacity on the line.

Another potential advantage lies in the possibility of reducing voltage drops along the line and, hence, spacing the substations further apart and optimising the traction power architecture.
The arrangements’ proposals put forward do not question the fundamentals of the 2x25 kV catenary supply system with a positive feeder, even in the case of a simple polarity reversal, since all the other technical data remain identical. Therefore it is important to note that the catenary’s homologation is maintained, that RAMS performance levels remain identical and eventually that the technical advantages observed are concrete, without incurring additional costs.

The results obtained shall encourage project owners to pay special attention to their choice of 2x25kV catenary arrangement with a positive feeder, given that they have a significant opportunity to improve electrical performance at identical cost.