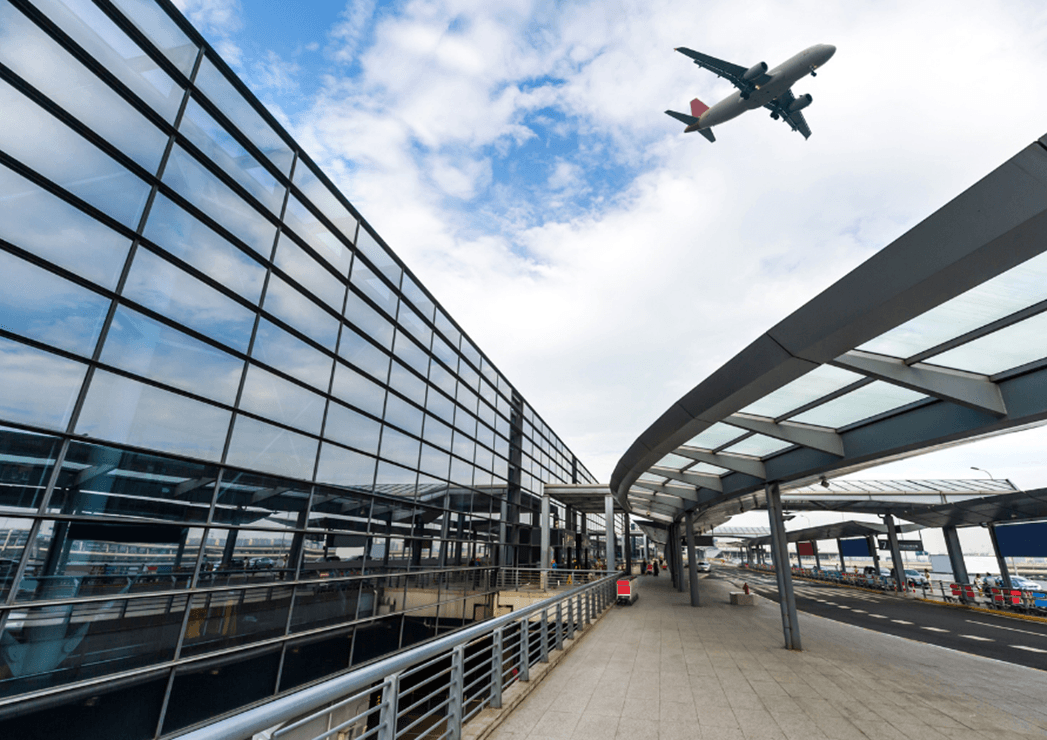 Technology breakthroughs and the development of Sustainable Aviation Fuels are major drivers for environmental efficiency in the longer term, but what can we do today to influence our aviation carbon footprint? This blog post looks at carbon emissions and other environmental impacts caused by aircraft at airports, and takes a closer look at what can be done to improve things on (and near) the ground.

What is net-zero aviation?

Aviation modernisation programmes worldwide have set ambitious environmental objectives to reverse the adverse effects of air transport on the environment. One example of this is Europe’s airlines, who have committed to decarbonise air transport and accelerate their efforts to make Europe the world’s first carbon neutral continent by 2050 through the reduction of carbon dioxide (CO2) emissions in absolute terms, and through CO2 mitigation1.
As reported in our 2021 White Paper, CO2 and non-CO2 emissions from aviation are estimated to account for about 3% of the EU’s total greenhouse gas emissions and 13% of all transport related emissions. Furthermore, flight numbers increased by approximately 38% between 2010 and 2019, with expected long-term growth globally despite the COVID-19 crisis - albeit at a slower pace.

Let’s begin by looking at the main environmental impacts associated with different phases of flight. Approximately 90% of emissions occur higher than 3,000 feet above the ground, whilst the remaining 10% are emitted during taxi, take-off, initial climb, approach, and landing2.

Figure 1 (below) illustrates the environmental impacts associated with aircraft operations during each phase of flight. While some pollutants such as CO2, unburnt hydrocarbons (HC), soot and sulphur oxides (SOX) impact the environment along the entire flight, others do not always occur (contrails) or their adverse effects are prevalent closer to the ground (aircraft noise, carbon monoxide (CO) and Nitrogen oxides (NOX))3.

CO2 is the primary greenhouse gas emitted through aviation activity, and has an overall warming effect by absorbing heat that would otherwise be lost to space. During aircraft flight, excess CO2 emissions are often caused by aircraft that divert from the planned trajectory resulting in more inefficient routes being flown. This could be due to adverse weather, avoidance of ‘Danger Areas’, the need to maintain minimum separation, lack of capacity leading to diversions, or the avoidance of relatively high route charges. When comparing the gate-to-gate actual trajectories of all European flights in 2017 against their unimpeded trajectories, there is an additional 5.8% of CO2 emissions at European level4. Figure 2 presents excess CO2 emissions for an average flight in Europe in 2017, broken down into different phases of flight. 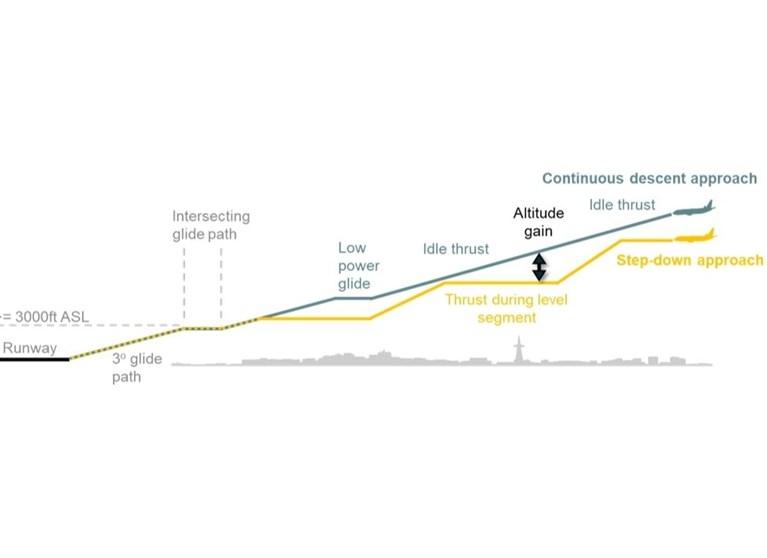 Reducing absolute and excess CO2 emissions is a key focus for the aviation industry, but what about non-CO2 emissions? The European Aviation Safety Agency (EASA) argues in a recent report that non-CO2 climate impacts from aviation activities are at least as important as those of CO2 emissions5.

Of biggest concern around airports is the increasing levels of Nitrogen dioxide (NO2) at ground level, generated from NOx emissions caused by surface traffic, aircraft and airport operations. The net effect of these tropospheric nitrous gases is a warming influence, caused by the production of ozone in the lower atmosphere. At higher altitude, NOx is thought to damage the stratospheric ozone layer which is the protective layer that filters out harmful radiation from the sun.

Particles in the air at ground level, including hydrocarbons, soot and sulfates also impact climate change. Whilst sulfates reflect the sun’s rays causing a cooling effect, soot absorbs heat resulting in black carbon ice crystal nuclei, which together with hydrocarbon particles, produce contrail-induced cirrus clouds which have a serious warming effect, up to three times that of CO2. According to the Environmental and Energy Study Institute in the USA, the collective influence of cirrus clouds, produced by thousands of flights, is so large today that it exceeds the total warming influence of all of the CO2 emitted by aircraft since the beginning of powered flight2.

Not only do these air pollutants impact climate change, but they also have a significant effect on human health, particularly in urban areas. The most harmful pollutants are particulate matter, NO2 and ground level ozone, originating from aircraft engines, ground operations, surface access road transport and airport on-site energy generation and heating6.
Focusing efforts to reduce emissions closer to the ground will have health benefits and will help in the battle against climate change, ultimately contributing to the net zero target. For both airports and Air Navigation Service Providers (ANSPs), however, emissions from aircraft count as indirect “Scope 3” emissions7. Naturally, these are far more difficult to reduce than direct (Scope 1 and 2) emissions because tackling them involves a great deal of external collaboration with third parties including airlines, other airports and/or ANSPs and often local communities.
Egis is doing a number of things for clients and across its own airport network to make positive steps towards reducing emissions from aircraft, as well as noise annoyance which is often related. Let’s now explore a few proven solutions …

Incentivisation of efficient aircraft operations during take-off and landing is one of the most effective ways to help reduce emissions close to the ground. Continuous Climb Operations (CCO) and Continuous Descent Operations (CDO) are the optimal climb and descent procedures to be followed by all aircraft when departing from, and arriving at, an airport in unrestricted airspace. These profiles are flown in a low drag configuration, minimising fuel burn whilst simultaneously reducing gaseous emissions and noise. A EUROCONTROL CCO-CDO study undertaken in 2018 identified that optimisation of CCO-CDO in Europe could result in fuel savings of up to 340,000 tons of fuel per year, equating to more than 1 million tons of CO28. The removal of inefficient level flight segments at intermediate altitudes means that aircraft spend more time at fuel-efficient higher cruising levels, thus lowering emissions. Figure 3 illustrates an optimum CDO approach (green) versus a non-optimal approach (orange).

Pollutant emissions from aircraft at ground level are increasing with aircraft movements. Ground operation CO2 emissions are small compared to air operations; however they are still significant and play their role in contributing emissions to the environment. Material reductions can be achieved, estimated to be in the order of 20% per movement for ground-based aircraft activity today with potential for even greater efficiency improvements in the future9.

It is well known that aircraft engines during taxiing produce forward thrust, even at idle or minimal power settings. By shutting down one engine during the taxi-in, or by starting the second engine at an advanced stage of the taxi-out for take-off, there is potential to reduce fuel burn, CO2 emissions, and harmful emissions to health. For taxi-in operations a fuel burn saving of between 20-40% per aircraft movement has been estimated9.

Today, aviation jet fuels are used in APUs to power on board electrical systems, run air circulation and conditioning systems, and supply bleed air for starting the main engines. Ground based systems which use grid electricity generated at higher efficiency and with a much lower carbon intensity, can be used as an alternative to APUs to supply electrical and air conditioning loads. Substituting APUs with airport-based systems is estimated to reduce emissions by up to 40%9.
Operational predictability is key - reduced holding at holding points and optimal throughput at the runway means that less time is spent burning excess fuel. One method to improve such predictability is the adoption of a Departure Manager (DMAN) - a planning system designed to improve departure flows at airports by calculating the Target Take Off Time (TTOT) and Target Start-up Approval Time (TSAT) for each flight. In combination with Airport Collaborative Decision making (A-CDM), this tool can help reduce needless delays and unnecessary fuel burn, ultimately reducing aviation emissions.

It will take many steps, across multiple topics to tackle aircraft emissions. Managing capacity, implementing CCO/CDOs and achieving operational predictability are part of the mix, but so are innovations, such as those that we have begun to explore alongside our partners in the EC-funded Horizon 2020 “TULIPS” Green Airport programme. Egis is involved with work packages which focus on data driven intermodal services, circular economy at airports and carbon sequestration. Watch this space!

Although not a climate issue, noise from aircraft is a primary annoyance for local communities and can also lead to health issues. To comply with the EU Environmental Noise Directive, operators of airports with over 50,000 movements a year are required to draw up Noise Action Plans, taking into consideration the International Civil Aviation Organisations (ICAO) Balanced Approach to aircraft noise management. The Balanced Approach can be classified into four principal elements: Reduction of Noise at Source, Noise Abatement Operational Procedures, Operating Restrictions, and Land-Use Planning and Management.

Actions that can be taken to help alleviate noise impacts include:

As well as supporting the development of a new noise metric for the UK CAA, we have been supporting Gatwick Airport since 2016 with the implementation of a series of noise reduction initiatives. Read our Noise Management case study for further details of our work in this area.

We have touched on a range of actions that can be taken to help tackle environmental impacts from aircraft on or near the ground, but to validate their effectiveness how can they be measured and reported?

One method is to use reporting tools such as league tables, performance tables and dashboards, all capable of measuring performance against target Key Performance Indicators (KPIs) and metrics. In recent years we have been immersed in developing such tools for airports, ANSPs and Eurocontrol, all designed to meet the specific requirements of each stakeholder. From Heathrow’s Fly Quiet and Green league table to Gatwick’s Airline Noise Performance table, these tools are designed to encourage airlines to reduce their noise/emission impact by continually improving their operation and enhancing their aircraft fleets to adopt quieter and more fuel-efficient aircraft types. Such programmes involve evaluating performance using a set of metrics, engaging directly with selected airlines to discuss performance, and reporting the results publicly and with complete transparency to incentivise good practice by airlines.

Egis colleagues have also developed an intricate sustainability dashboard for a European ANSP to measure the factors impacting en-route horizonal and vertical flight efficiency, and therefore environmental performance. This dashboard is capable of calculating fuel burn and emissions for various phases of flight, including both CCO and CDO operations in terminal airspace.

Steps to sustainability: what else can be done?

Reducing aircraft emissions and noise around airports is far from the only sustainability challenge being faced by airports today, there are steps to be taken across all other emission scopes. In future blogs we’ll be talking about our work for clients and across Egis’ own airport network to make progress in several of these, including:

Effective tracking and management of all these steps naturally requires sound processes, reporting and modelling tools. Contact us directly to know more - or look out for our next Steps to Sustainability blog post.