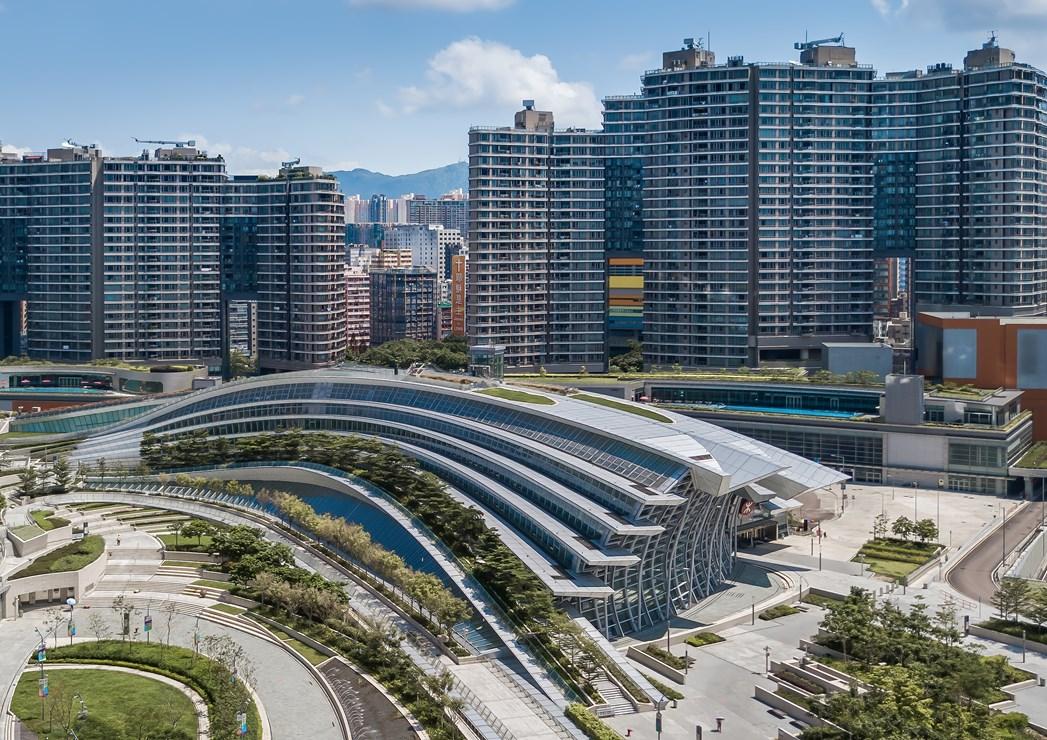 Delivering an urban landmark for Hong Kong and connectivity with mainland China.

The West Kowloon Terminus is an iconic high speed railway hub that connects Hong Kong with mainland China and provides mixed-use development opportunities for the adjacent areas’ residents and businesses.

Façade and BMU solutions for irregular but functional structure
The irregular and shell-shaped and complex geometries making up the overall form of the building sit atop a railway hub 30 metres underground, and must fulfil high energy and water conservation standards while enabling sufficient lighting and water usage.

Connectivity with mainland China
The West Kowloon Terminus is a US $10 billion public infrastructure investment by Hong Kong. As the city’s only high speed railway hub, transports 80,100 passengers daily, integrating Hong Kong’s economic activities with other major Chinese cities such as Guangzhou and Shenzhen in the Greater Bay Area.

A high speed rail gateway integrated into the city’s economic and sustainable development.

The West Kowloon Terminus was therefore built on reclaimed land. It also had to serve multiples purposes of creating a corridor with space capable of moving large number of passengers between Hong Kong and mainland China, while providing a mixed-use development connecting to the public space adjacent to the West Kowloon Cultural District.

The terminus is the southmost major station of China’s 37,900 kilometre onshore high speed rail network, and the architectural design expresses such prominence.

However, the monumental scale also integrated a sustainable approach to urban design and building solutions, to which our façade, and access and maintenance work contributed.

Our specialized expertise was part of the bigger efforts to develop open and green space for the residents and businesses in the neighbourhood, capturing daylight for the station’s underground space and collecting and recycling water from the city’s heavy rainfalls, showcasing loud Hong Kong’s longstanding emphasis on green.

The overall structure of West Kowloon Terminus’ roof structure is highly irregular in shape, forming a shell-like dome rising from the ground,  and is made up of long span steel trusses with huge differential movements and tolerances.  The building has a 3-dimensional roof structure with associated glass façade systems.  The cleaning and access requirements internally were particularly challenging due to the high ceilings and geometry.  Inhabit was appointed as the façade and BMU consultant for the main contractor Leighton-Gammon Joint Venture.

Inhabit also worked closely with the façade sub-contractor Gartner (now PISA) to develop systems and solutions for the complex geometries that make up the overall form of the building.

In addition to the façade, Inhabit worked on the access and maintenance strategy and documentation for both exterior and interior atriums.

Supporting the construction of Poland’s most modern tram depot

The first wooden tower in the Principality of Monaco