Bahrain
As part of its Economic Vision 2030, the Kingdom of Bahrain aims to modernize public transport in the country and plans to procure its first Light Rail Transit System (Bahrain Metro Project) through a Public Private Partnership.
Share this project • 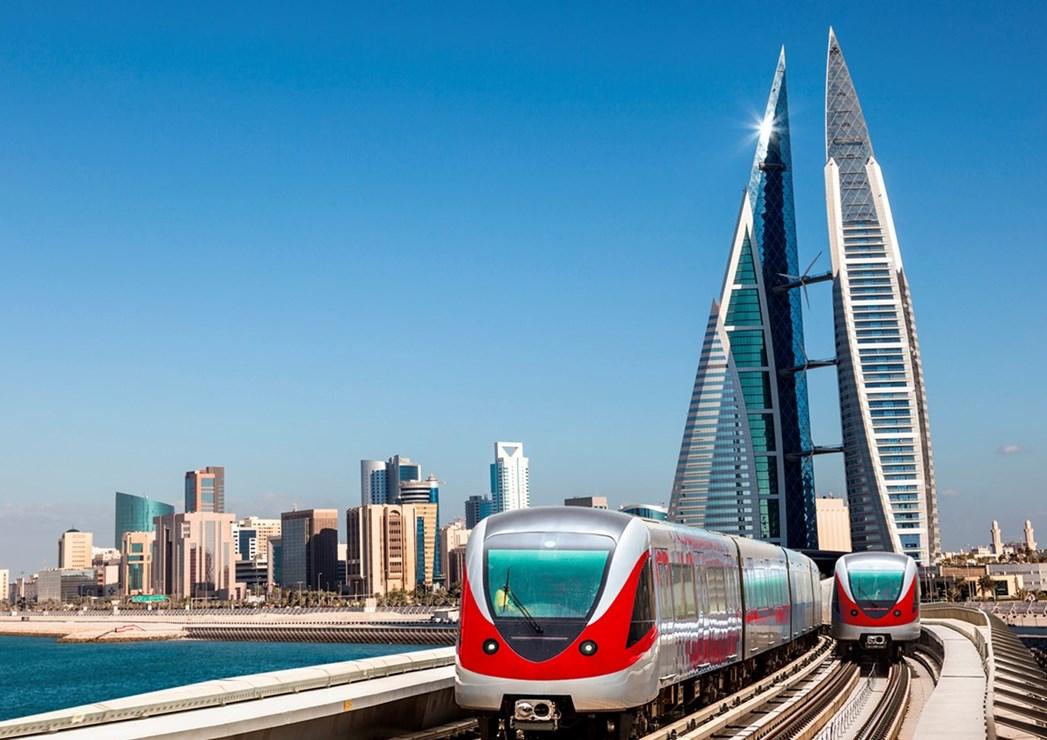 Ministry of Transportation and Telecommunications

The development of an integrated public transport network will not only lead to a modal shift from automobiles and reduce future congestion, but it will also generate wider socio-economic benefits such as reducing emissions, promoting clean safe environment, and creating direct and indirect business and employment opportunities.

for the Blue Line, 9 stations for the Red one.

expected in the first years of operation.

As part of its Economic Vision 2030, the Kingdom of Bahrain aims to modernize public transport in the country and plans to procure its first Light Rail Transit System (Bahrain Metro Project) through a Public Private Partnership.

The Bahrain Metro project comprises a 109km network with four transit lines to be developed in phases. Bahrain Metro Phase 1 represents the first phase of the Ministry of Transport an Telecommunications’ (MTT) ambitious plan and starts with two lines with an estimated length of 28.6 km. It includes 20 stations with two interchanges. The two lines aim to connect the key transit points including the airport as well as major residential, commercial, and educational areas in Bahrain.

The initiative is spearheaded by the Ministry of Transportation and Telecommunications.

Egis acts as a Technical Advisor within a transaction advisory team formed with KPMG and DLA Piper to produce the call for tender documentation and assist MTT in the process of executing a PPP agreement with the most capable consortium in both terms financial capabilities and technical capabilities.

A sustainable and attractive transportation service.

The needed development of sustainable transportation infrastructures is worldwide facing the issue of heavy funding. Rail projects that are currently under construction or operation have been financed using the public fund. Bahrain government has a long track record of developing partnership with private sector for financing public infrastructures. Bahrain metro is hence considered as a new opportunity of collaboration with the private sector.

The key challenge was to imagine a new form of procurement for the rail industry in the Middle East.

The country intends to attract rail industry actors and private equity investors to support the government of Bahrain in providing a best-in-class way of transportation for the dwellers. The mechanism of payment will allow to ensure quality of transportation service for the inhabitants, attractive return on investment for private investors, and affordable financial effort for the Public Sector.

Bahrain Metro will be integrated within the existing road infrastructure Copyright: Ministry of Transportation and Telecommunication.

A key role as a Technical Advisor.

Within the Transaction Advisory team, Egis has a role of Technical Advisor with
services that includes :

• The definition / strategy of the PPP (Public Private Partnership) concession mode to be implemented from a technical perspective.
• The revision of the route, to propose the most efficient locations due to the urban environment and constrains
• The study of construction constraints in a dense urban environment
• Traffic studies confirming the modal choice
• Transit Oriented Development studies
• Economic development opportunities along the metro network
• Integration of existing bus networks and definition of location for park & ride
• Environmental Impact Assessment
• Geotechnical Boreholes campaign

The first phase of the Technical Advisory assignment consisted in the validation of the Metro Phase 1 key features as defined by previous studies and which lead the Ministry of Transportation and Telecommunication to the decision of implementing the project under a PPP form of contract.

It started with a due diligence of all studies previously undertaken by the Ministry of Transportation and Telecommunication. This allowed the project team to highlight gaps and propose complementary tasks to be undertaken for achieving suitable PPP Contract. As a result some of the key features of the Metro Phase 1 were modified; e.g the relocation of the Airport Station in front of the newly built terminal for better integration and passengers experience.

During the initial phase, Egis supported KPMG in producing the financial model of the project. The three key inputs to the financial model developed by Egis were a ridership study based on the Country Strategic Transportation Model, in addition to OPEX and CAPEX elements.

Based on the later, the Transaction Advisor team proposed a PPP procurement model consisting in a vertically integrated all-inclusive disciplines with a Payment Mechanism based on KPIs measuring the quality of service during operation.

A Risk Register associated with mitigation measures while detailing Functional Output Specifications was produced to optimize the risk profile of the project for both private and public sectors.

Egis produced technical specifications including the ones related to Transportation Services during Operation phase to be included in the future contract and to advise the legal advisor about specificities of Metro Projects for inclusions in the conditions of contract.

A market sounding event that was conducted in two stages was organised to increase the attractiveness of the project toward the private sector and better understand the conditions for their appetite.
• Stage 1 comprised of a Global Market Consultation event where potentially interested companies were invited and provided with information about the project and opportunity was given to participants to seek clarifications.

The event was well received and attended by more than 300+ candidates from over 100 organisations across the globe.