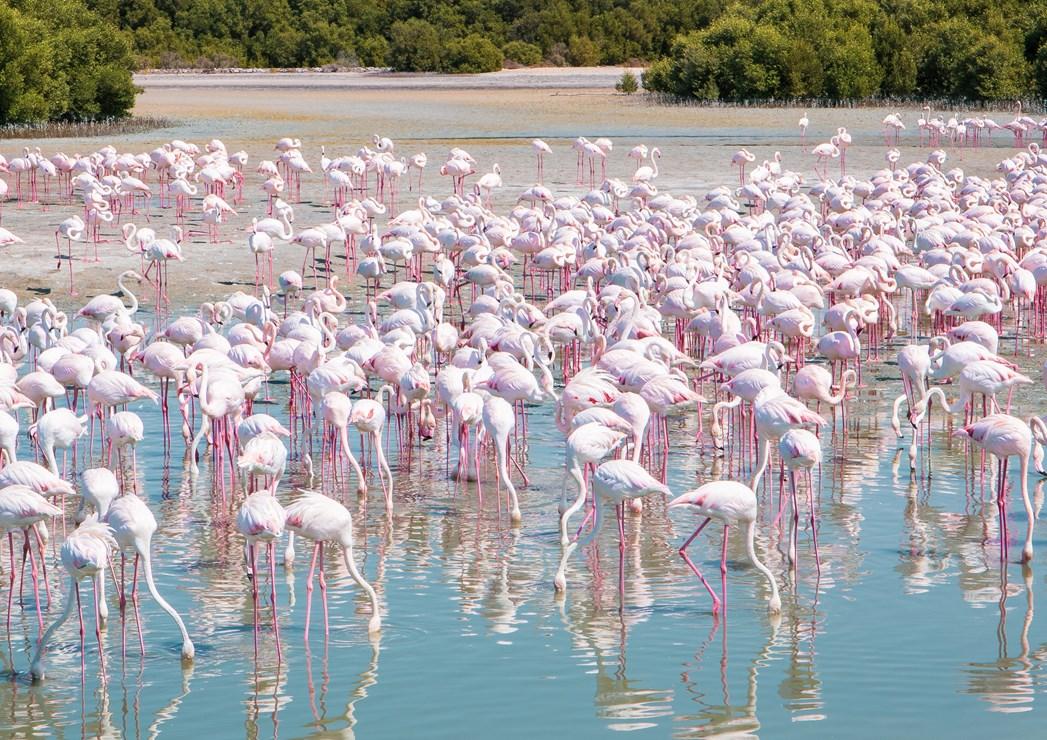 Benefits of the rehabilitation project

Large volumes for the remediation team.

of wastewater to be evaporated.

of contaminated soil to be depolluted.

A rehabilitation that became urgent.

Located in the Al Rayyan region, west of Doha, the Al Karaana lagoons cover more than 4 km² and are facing major environmental problems.

The reason for this is the nearby wastewater treatment plant, which discharges every day no less than 200,000 m3 of treated wastewater into the fragile biotope. In addition, 100,000 m3 of domestic and industrial wastewater is discharged by trucks. Over the years, these discharges have resulted in soil contamination, odors and environmental pollution.

The ecological importance of the site.

Water and biodiversity reserves are extremely rare in Qatar and Al Karaana is one of the few protected wetlands and animal reserves in the country.

The client, the Qatar Public Works Authority (Ashghal) and the Ministry of Municipal Affairs, in search of viable solutions, had for a time considered covering the lagoons and closing the area. However, our ecological survey revealed that the lagoon area was still very much alive:

Following the results, it was decided to revalue and rehabilitate the lagoons, creating important animal colonies during the summer period, when fresh water is scarce.

Located in the Al Rayyan region, west of Doha, the Al Karaana lagoons cover more than 4 km² and were facing major environmental problems.

Once the ponds were rehabilitated, the animals began to quickly reoccupy the area.

After several months of work, the rehabilitation of the Al Karaana lagoons is a great victory for the environmental cause.

From soil remediation to the return of biodiversity.

Egis is focusing on the environmental aspects of the project in order to propose solutions to minimize pollution and protect the established fauna, with a long-term vision.

The project includes five major phases: ecological survey, design, clean-up and disposal of all sources of pollution, rehabilitation of the nature reserve in “non-developable” status and protection of existing habitats.

For this long-term project, we first had to evaporate 4.7 million m3 of wastewater and clean up nearly 2.7 million m3 of contaminated soil, with lime treatment and thermal desorption. We then stored the most polluted sediments in a secure landfill, created a watertight industrial water discharge basin and developed a wildlife preservation area, kept wet by timely reuse of treated water from the nearby plant.

When Egis provided pre- and post-contract professional consulting services for the rehabilitation of the lagoons, the proposed solutions focused on reducing pollution and preserving the biodiversity present over the long term:

Egis mission is to mobilize all its engineering capacities to control the environmental impact of this site, to rehabilitate it and adapt it to new uses, in accordance with the Group's sustainable development commitments.

Once the ponds were rehabilitated, the animals began to quickly reoccupy the area and the area to regenerate thanks to the planting of trees and seeds. A first chick was even born on the site, proof of this ecological success.

After several months of work, the rehabilitation of the Al Karaana lagoons is a great victory for the environmental cause.

The most ambitious urban greening project in the world